Dollar’s strength to be short-lived; volatility and weakness ahead – Reuters poll

The recent surge in the U.S. dollar will last less than three months, according to a majority of foreign exchange strategists polled by Reuters who said the greenback would have a roller coaster ride in the run-up to the U.S. presidential election.

In September, the dollar rose more than 2% – its best monthly performance this year. But the greenback is still down more than 3% in 2020, a loss which was not expected to be recouped over the coming year, according to the Reuters poll of around 80 strategists taken between Sept. 28 and Oct. 5.

While last week’s ill-tempered debate between President Donald Trump and Democratic challenger Joe Biden reinforced concerns the outcome of the Nov. 3 presidential election could be questioned and boosted the greenback, hopes for U.S. stimulus have had markets in the mood for riskier bets.

The expected pull and push in the currency market in the lead up to the election was underscored by the wide range of forecasts in the one-month-ahead predictions compared to the previous month.

While Trump’s positive test for COVID-19 and data on U.S. currency futures positions point to upside potential in the dollar’s recovery, nearly three-quarters of analysts, 54 of 75, in response to an additional question said the greenback’s recent surge would last less than three months.

That included 13 respondents who said the dollar’s run-up was already over, while the remaining 21 predicted it to run for over three months.

“The outlook for the next month or so is messy to be honest, because of the U.S. election… but the dollar will benefit from the ongoing political uncertainty in the next few weeks,” said Kit Juckes, head of FX strategy, at Societe Generale. 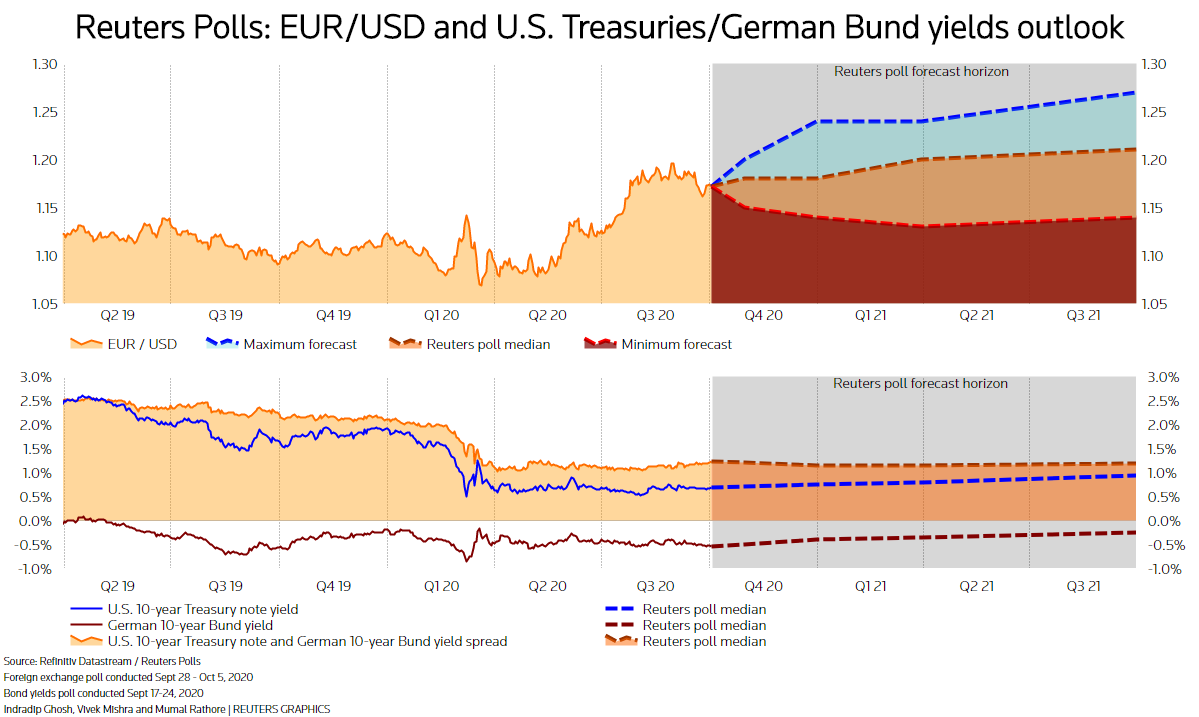 That expected volatility was also highlighted in the median responses to additional questions, which showed the dollar could rise around 2%, or conversely fall by as much, in the run-up to the election.

But beyond the near-term, strategists remained skeptical about the dollar’s strength as the U.S. Federal Reserve’s aggressive easing has wiped out the yield advantage of dollar-denominated assets.

That was reflected in predictions over the coming year for the euro. Having lost about 2% in September against the dollar, it forecast to trade about where it was on Monday – around $1.18 – in three months, and then rise over 2.5% to $1.21 in a year.

Still, the greenback’s appeal as a safe-haven asset and demand for it as a reserve currency from global investors, governments and central banks for portfolio rebalancing and fund transfers was expected to limit the weakening.

“The dollar is a safe-haven because of its intrinsic qualities and its liquidity – as there’s so much debt around the world issued in dollars and because so many business invoices are drawn up in dollars on a day-to-day basis,” said Jane Foley, head of FX strategy at Rabobank.

“There have been investors wondering if their short dollar positions were sensible in the current environment. And you’ve just seen some short-covering of dollars certainly.”

Other currencies such as the Japanese yen JPY= and the Swiss franc CHF=, which are widely considered as safe bets, have gained this year against the dollar.

That trend was predicted to be in play in the near-term.

Against currencies associated with higher risk such as the Australian and Canadian dollars, the greenback has slid and that trend was predicted to hold true provided an expected economic recovery from the coronavirus crisis improves the outlook for commodity prices.

Indeed, after gaining more than 2% this year so far, the Aussie dollar AUD= was forecast to gain another 3% over the next 12 months. The New Zealand dollar NZD= and the Canadian dollar CAD=, nursing loses of over 1% and 2% respectively, were forecast to gain nearly 4% and 2%.