Arteta wants Nketiah to stay after goal against Leeds 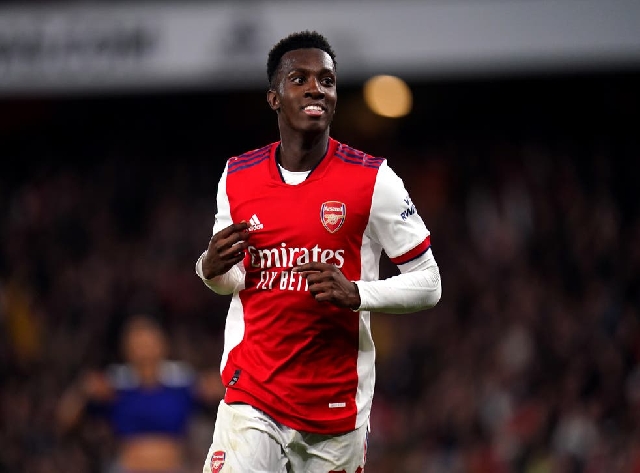 Arsenal boss Mikel Arteta says Eddie Nketiah has a future at the club after he scored to help the Gunners see off Leeds United and reach the Carabao Cup quarter-finals.

Substitute Calum Chambers’ header crept over the line seconds of coming off the bench before former Leeds loanee Nketiah pounced to wrap up the tie.

The forward cleverly flicked the ball over a stranded Illan Meslier and just did enough to nudge it over the line before the visiting keeper could recover.

“I have full belief that he is going to be a top, top player and hopefully at Arsenal,” said Arteta, who has helped develop a number of young Arsenal players, including Emile Smith Rowe and Bukayo Saka.

“I’m happy to have him, he is our player, I regard him really highly and from my side I want him to stay.”

Leeds had looked the more threatening side until the first goal in an open and entertaining game against a much-changed Arsenal side at Emirates Stadium.

But Arteta’s outfit were comfortable after establishing their lead as the visitors became stretched looking for a way back into the game, with Nketiah impressing.

The 22-year-old, who was linked with a move to Crystal Palace in the summer, was making only his second appearance this term and is out of contract at the end of the season.

“We had a situation in the summer that we tried to resolve and we couldn’t either way,” said Arteta. “That contract situation is more and more common in football where we are coming from with Covid and a lot of the issues that we have to resolve.

“I have no doubts what he can offer. Whatever you throw at him, he wants more and he demands himself more.

“I’m delighted to see his performance. He totally deserved it. He has other players who play in that position and he has a personal situation but I try to leave that aside.”

Arsenal, hoping to win the competition for the first time since 1993, will find out their last-eight opponents in Saturday’s draw.